Years ago I discovered that the Renaissance used glass in their mediums of oil. This reflected the light in the room and came out of the viewer. Much like stain glass windows it is a different quality light that is ambient. To illustrate the power of this kind of light one only has to look at the plight of newspapers. The reading of them is 2 dimensional and quiet. Compare that light to the computer where the light is coming out at the viewer from behind the image. The same thing happened to the movie industry when television was 1st available.

I have always been interested in what happens to form when combined with the elements of time. I believe that everything in the universe is affected by time and time is always in a state of transition.
Read More 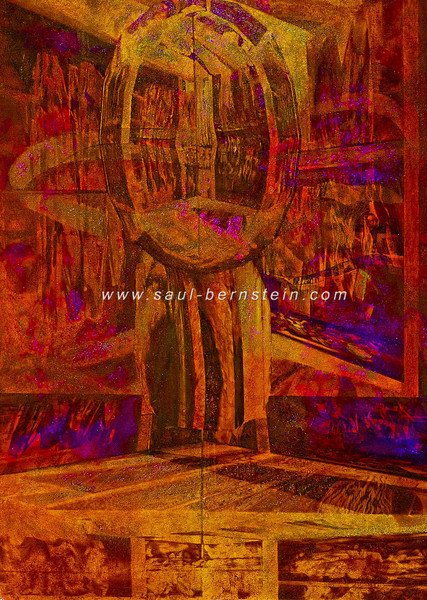 Sometime ago I read the Russian newspaper Pravda. They interviewed
2 professors from Russia who had taped the voices of the spirit world. They asked them how did the plane go down. The spirits claimed it was terrorism. The Russian government re-opened the case and changed their story which originally was called an accident. They then asked the spirits “do we look like animals when they die?” Their answer was “No, you look like waves.” Having studied the world of auras for many years I becme excited for we are 70% liquid. With that as a base one can make the case of our possessing the ability to produce electric waves. This work deals with that. In the center of the painting is an
egg shape (which is our creation) and spinning out of the in all sides are the waves. All of the planets also have waves and the Hubble photographs them as auras of light. The Hubble also claims that planets and stars that are coming at the space station are blue in color. The red ones are going away. In art school we are taught just the opposite...warm colors advance and cool ones recede. If Da Vinci was alive today he would have to use this new color theory. In this painting I have used this new use of color.