Having a love of music I felt doing a series of portraits of the composers would have to include their music. I constructed a graphic language based on the music score.
From this structure, the likenesses began to appear.
Read More 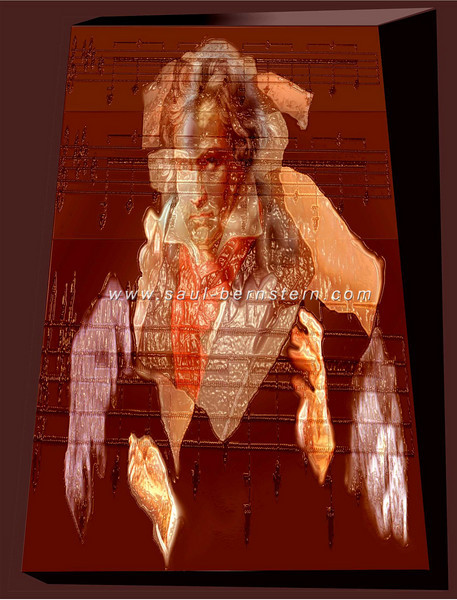 As I began to think about Beethoven I became aware of his anxieties. His frustrations stemmed from his deafness. The most popular work of his time was Moonlight Sonata, which he grew to dislike because audiences only wanted to hear that piece of music. Never mind his symphonies, audiences demanded the short Moonlight Sonata.

I started with this sonata as an irritant to remind me of my purpose throughout the work. I abstracted the sheet music into graphic symbols. The other element that became apparent to the work was the hands. In all of art history it was the hands that were used to express emotions. In the Renaissance it was codified; each digit had a meaning. I began to study a conductor’s use of the hand and that became the starting point for this work. The hands slowly became his figure and head.